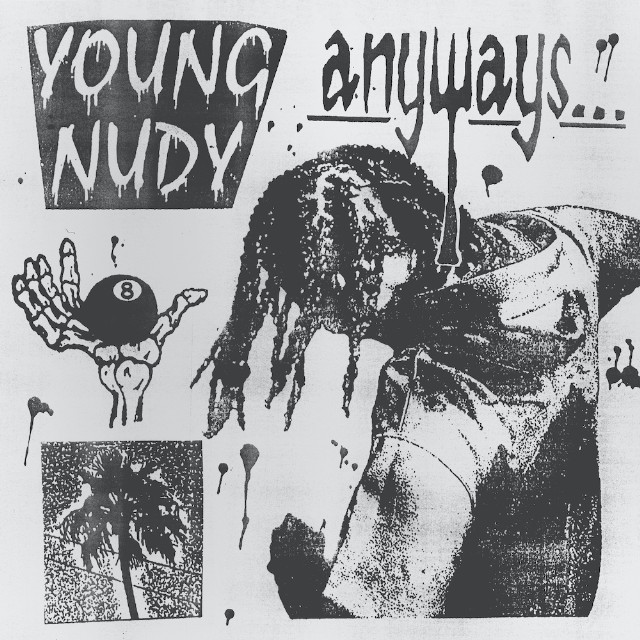 The underground artist from Atlanta, Georgia has dropped his newest project Anyways. Young Nudy has had quit a prolific run, with projects like the Slimeball series and Sli’merre. However, first listening to this artist, I put him to the side when I heard Slimeball 3. Nothing really impressed me, but the tendency to write-off artists is something I never want to fall into. So the decision was made: Nudy will get another listen from me.

Apologies need to be made to Young Nudy: this album is great. He’s a breath of fresh air when it comes to listening to Atlanta artists. Not only because of his unique sound, but his capabilities to spaz out on a track. On multiple occasions, basically on every track, Nudy goes off rapping about the lifestyle he grew up in. He speaks on a lot of gang affiliation and the violence he went through, but does it in a creative way. Supported by some stellar trap-production from 20Rocket, Nudy consistently comes through with textbook examples of trap bangers. Their music makes me drive to my 9-5 job while giving the mean mug face that LeBron James makes in his Instagram story videos.

You don’t have to go too far in the tracklist to find a banger, like “No Go” where raps and croons aggressively all throughout this track. And you can hear that aggressive flow with just about any beat that is presented. You want a crazier, silly sound like “Blue Cheese Salad”? Nudy has it covered. How about a softer, deeper and atmospheric sound like “A Nudy Story” or “Deeper Than Rap”? No worries, Nudy can do that too. You already know he can do a harder, trap sound like “No Comprende” and “Influencer”. Nudy is versatile in that he can murder just about any sound you send his way. He keeps it consistent and well-rounded, just as 20Rocket keeps his production crisp and hard hitting with an assortment of trap-flavors.

Now all of this sounds great, but there are things that Nudy needs to keep tabs on when making music. The main thing he needs to bring is that essential energy consistently. A few times on here he is rapping, but sounding damn near unenthusiastic to make music. The first track “Understanding” loses its momentum as the track goes on. “GTA Freestyle” has that same feeling, where he just seems bored of rapping halfway through. The worst of it is “I Won’t Flex” where he tries his hardest to make a track while taking a nap. Now, only three out of the 16 tracks being a problem is a good percentage for Nudy, so it isn’t the biggest issue. It seems to be of a lack of ideas more than anything.

This project was an enjoyable one. Young Nudy came through with clever hooks, consistent content and stayed true to himself while 20Rocket made valuable contributions on the beats. Nothing seemed stale or tiring as the album went on, and that is great to see. What he lacked in the opening of himself as a person, he saved by creativity in the music. Nudy isn’t at the peak of stardom yet, but if Anyways tells us anything, it’s that he is only one smash hit away from making it to the big time.

Tracks to Save: “Blue Cheese Salad”, “Deeper Than Rap”, “Influencer”, “No Comprende”