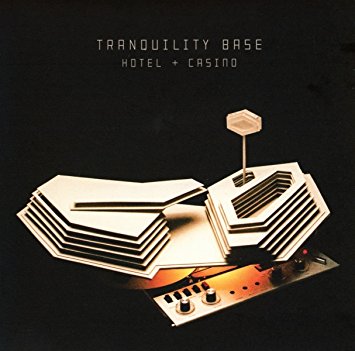 When a band drastically changes its sound with a new album, the result can usually go three ways:
1. Sweet, succulent success with both the fans and critics
2. An absolute dumpster fire that evokes toxic backlash from every fan that has internet access
3. A collective “What even is this?” from everyone who listens to the album

When you think of bands that constantly change their sound and usually succeed, the British indie band Arctic Monkeys comes to mind. If you watch their trajectory from their punky debut album Whatever People Say I Am, That’s What I’m Not to their last album, 2013’s slick and nocturnal AM, you’re bound to see them tackling different ways of making rock music. A vast majority of Arctic Monkeys fans enjoy these past albums, despite the sometimes massive deviation from previous works. The fan and critical reaction to the band’s latest effort, Tranquility Base Hotel and Casino, has been very mixed however. Some say that it’s too different from the past, and too anti-rock to be truly qualified as a good Monkeys album. The project, however, is one that takes a little time to grow on you; once you give it a few in depth listens, you’ll find a solid sci-fi lounge rock album.

If you judge Tranquility Base Hotel and Casino on a surface level, you’re most likely going to be confused as hell as to why a rock band made this. Throughout its 11 tracks, TBHC is consistently quiet, lenient on the guitars, and steeped in its self-induced depression. Its indulgence is something to behold, as it carefully crosses a tightrope between parody and seriousness with its take on atmospheric lounge music, a genre that is very hard to be engaging to listeners in the age of catchy songs like “Gucci Gang”. Lyrically the album is dense, covering topics such as alienation with fame, overuse of technology, lost friends, and amazing hotel reviews. Alex Turner, the Monkeys’ frontman, has an exceptional lyrical talent on this album, sticking to the album’s loose concept surprisingly well as he plays a lonely, suave, and possibly crazy lounge singer on a moon-base hotel in the 1970s. While there is the occasionally awful line (such as in the title track, wherein he asks his lover to kiss him “underneath the moon’s sideboob”), there’s a lot of great lyrics to analyze here, including the hilarious mocking of modern day review scores on “4 out of 5”, the wonderful imagery painted on “One Point Perspective” or the dystopian state of the world described on “American Sports”. There are a few clunky hooks throughout the album, especially with the lame chants on “The World’s First Ever Monster Truck Frontflip”, but when the hooks work, they freaking work. “She Looks Like Fun” has an absolutely bonkers chorus, with its almost gothic shouting, and even “One Point Perspective” succeeds with its simple refrain of “bear with me man, I lost my train of thought”. With an album like this, modern day rock listeners can acknowledge that good lyrics are not a thing of the past.

The biggest turn off for the Monkeys’ previous fans on TBHC, at least from what I can gather, is the total deviation from their past rock sounds. Although many a frustrated fangirl or fanboy has made the case that the album sounds the exact same throughout its runtime, TBHC demonstrates a lot of subtle instrumentation that works better and better with repeated listens. The piano is the main course in the Hotel’s menu of sound, but its supplemented by a lot of different sides that, while not necessarily loud, add to make the mix of instrumentals richer overall. The groovy bass lines on “One Point Perspective” combine exceptionally with the plinking piano and Turner’s crooning on the track, while the slow guitar strums on “Golden Trunks” add a great tension to the track’s darkness. The album doesn’t really pick up much from its sleepy pace, with the loudest track being the standout, Humbug inspired “She Looks Like Fun”, but the restraint all adds to the lounge music concept. If you can picture yourself listening to this music while having a nice drink, looking out at space, the instrumentation just makes sense. Sure, the album does contain a few snore-inducing moments in its production, especially with laughable beats on “Batphone”, but if that means getting David Bowie inspired space-ballads such as on the standout “The Ultracheese”, it’s definitely worth it!

So, of the three aforementioned results on taking on a new sound, how does Tranquility Base Hotel and Casino stack up? Many are split on the three options, and even I was for a while, as I had no idea what to really think about the Monkey’s latest effort (hence why this review took so long to finish). After many listens, I’ve realized that despite its minor instrumental and lyrical hiccups, TBHC is definitely a great album. Its concept is unique for the indie scene, its lyrics and instrumentation are solid overall, and it’s a great nighttime vibe. While I do think this project will take a bit of time to settle with the average listener, the Tranquility Base Hotel and Casino is definitely a place you should take a visit to.

Tracks to Save: “One Point Perspective”, “American Sports”, “Four out of Five”, “She Looks Like Fun”, “The Ultracheese”