JAY-Z releases his most emotional and impressive set of songs in over a decade.

It says a lot when your first song on your album directly references your own death, especially when you’re as big an artist as Sean Carter, aka the world famous JAY-Z. That’s just what happens, however, on “Kill JAY-Z”, the first song on 4:44, JAY-Z’s most recent album, released June 30, 2017. Coming out of yet another fake retirement, Carter has seemingly emerged from the shadows not only to respond to last year’s hit album, Lemonade (an album produced by his equally famous wife, Beyoncé), but to kill any past image people may have had of him. Lemonade shocked the world last year with its revelations of infidelity by JAY-Z, and the whole world has been holding its breath, awaiting what JAY has to say. 4:44 is his response, and not only is it a well produced and performed album, but its JAY’s most introspective project to date.

The strength in 4:44 lies in it’s simplicity and rawness. The album itself is incredibly tight, a lean 36 minutes and ten tracks. This already solves the previous problem modern of modern JAY albums feeling far too bloated and filler-heavy for their own good. In addition to this, the songs are sonically consistent, with stellar soul-sampling melodies and jazzy loops by producer NO I.D. Combined with the overall solid production, the songs themselves have a great off-the-cuff feel, as if Carter is speaking straight from his mind, with no filter or glossy finish, and we if NO I.D. is collecting samples and instrumentals, manipulating them more and more as the songs go on. It feels like JAY’s mind is a pool, and we just did a swan dive straight into his psyche. The raw aesthetic and borderline-freestyle way the songs are performed, both instrumentally and lyrically, usually means that this album does not have your typical “bangers” to get hyped up to. The closest the album gets to this is the standout “BAM” featuring Damian Marley; with its reggae style horns, powerful percussion, and hard braggadocio from JAY, the song hits harder than the rest and shows Carter at a sudden peak of his powers, both in the rap game and his status as a true hardened man. When he calls out other fake drug dealers on the lyrics in this song, you can’t help but side with Jigga on this one.

And this ultimately leads into why the album is so great; 4:44 itself feels as if we are sitting in a quiet, empty room with JAY-Z, discussing his thoughts on the modern state of things, both personal for him and for the modern state of music and society as a whole. “Caught Their Eyes”, a statement on the abuse of artists in the industry of music, featuring chilling lines about Carter talking with Prince before his death, as well as the auctioning of the pop legend’s property over a great Nina Simone sample, is a perfect example of how JAY’s viewpoint on modern affairs is mature, and intelligent. “Smile”, the preceding track, is an extremely uplifting anthem of love for Carter’s mother, who has come out as lesbian, over a wonderful Stevie Wonder sample and trap percussion, is a more familial song, and Jay’s performance here, as is on most other songs, is impressive and convincing. In tandem with his extremely clever writing in the project, what with his double entendres and great rhymes, Jay consistently shows his audience that yes, he may be old, but he’s still the boss we’d all like to work for one day. Even extremely personal cuts like “Marcy Me” display a level of nuance and relatability we haven’t seen in JAY-Z for years. Normally, it’s hard for anyone to relate to a casual multi-million dollar earning, multiple-Grammy winning, Beyoncé-marrying superstar, but his rhymes are so clever, and his personality so confident and honest, we can’t help but get behind him. Even on songs like “Moonlight”, where JAY seems pretty unlikable, being apprehensive towards over a new generation of rappers (over probably the most boring beat on the album), he works in some decent bars. Even in the lowest parts of the album, you can salvage something. That’s something special.

The album’s highest highs are pretty much reflections of what this album accomplishes in its short runtime. “The Story of O.J.”, with an absolutely stunning beat, riding on another Nina Simone sample and jazzy keys, is one of JAY’s great commentaries on race, money making, and poor spending choices. His confidences seeps through the track like water, and his message is clear: if we can’t overcome others’ hatred by typical means, we might as well save our money and invest to get rich. It’s equally hilarious, insightful, and well-rapped (that “money over here” line still melts my mind every time). The title track of the album, “4:44”, is arguably the most important song of JAY’s life, as a rapper and a human being. It’s here, over a downright beautiful Hannah Williams sample, that JAY-Z completely kills his ego, and apologizes to Beyonce for his infidelities, and his failures as a human being. His delivery is honestly heartbreaking, his lyrics incredibly introspective towards his relationship towards his kids and his wife, and ultimately humanizes the tough guy we all thought we knew. If the devil is in the details, then JAY won’t have any problems with anyone looking for them. He lays it all out there on this song, and the rest of the album.

As a whole, 4:44 is JAY Z’s best and most unique album in years. It’s quite a surprise for many people who haven’t expected much from JAY, and is a surprise for anyone into introspective, jazzy music. Do not miss this album if you are a JAY-Z fan. 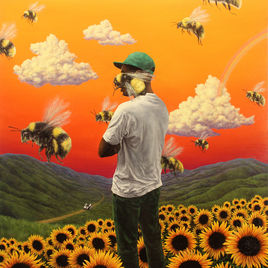