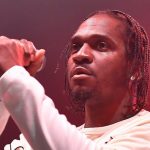 Pusha T writes some nasty verses; sometimes they're so nasty, they get left off the album...

Sometimes, a rap verse is more than simply catchy, fast, or clever. Sometimes, they’re layered, and reveal more about the artist than what appears to be a great verse on the surface. In this new series, I will take a weekly look at some of hip hop’s greatest titans, and see what makes their best verses so well done, and how it reflects them as artists and human beings…

And who better to start with than one of rap’s greatest living legends, Pusha T? A Virginia native famed for a sharp tongue, straightforward yet menacing delivery, and invincibility amongst today’s superstars, he has served as many great verses as he has bricks (which is a lot, mind you). His verses are so great, that sometimes they can body an entire track, and make everyone involved reconsider their verses or even take his off the song for the sake of dignity. This all happened with Pusha T’s unreleased Lil Wayne diss on “Maybach Music VI”, a Rick Ross posse cut from his latest album, Port of Miami 2. Shall we dive in?

“What a hell of a year, true colors exposed

Crowns on these clowns, it’s like you colored they nose”

In the span of about a year (from the release of Daytona and “The Story of Adidon” to Pusha’s string of acclaimed features), it’s indeed been a hell of a year for the man. The true meat of the couplet comes at the end, however. The bar, aimed at Drake and Lil Wayne, paints the supposed kings of hip hop as mere clowns due to Pusha exposing them as a deadbeat dad and aged has been . Push gave them the makeup for their underwhelming performances under pressure it seems…

When you speak truth to the power, your popularity grows “

Here, King Push goes even further in dissing the Young Money Camp. It appears that Pusha acknowledges the stagnant popularity Wayne has in comparison to his apprentice Drake. Push is characteristically EVIL in his bars, implying his superiority over the duo in terms of pure skill and resurgence of popularity. Pusha usually speaks without pretense, addressing the bare truth of what’s going on in the game: he’s up, Wayne is down. And Push is curb stomping him.

“Peers switch gears out of relevance or fear

All you n****s weird, how could you compare

Here, Pusha T plays the voice of the masses, aiming directly at Wayne’s neck while utilizing some great “-ear” rhyme schemes. By combining his skillset of rapping and accusation of Wayne switching up and not being as good as he was in the past, he accentuates his dominance over the New Orleans superstar. Known to bare his enemies to the bone on tracks, his claim that Wayne uses fake riches to hide is obscurity is just mean, but altogether true. Just check the average Metacritic score for Wayne’s albums in the 2010s: not exactly as great as he used to be.

For every hundred thousand dollar chain I see

On a thousandaire’s neck, that I dare not be

This one is simple. Pusha T is a businessman, known for extending his hustling beyond cocaine and rap, to fashion and other ventures. Continuing the theming of fake successful rappers above, he sets himself above the competition; for someone as wise and reserved as Pusha, the lane of fake wealth and unsustainable spending is one he’ll probably never visit. A true businessman indeed.

This is less of an outright diss, and more a warning shot. Pusha’s batting average is high in terms of successful disses, so anyone willing to put up any online shenanigans against Pusha T can expect to tread on dangerous ground…

Been fly like a runway was cleared for him”

Here, Pusha continues his self-aware streak of personality by acknowledging his consistency and importance in hip hop. Comparing himself to the famous Liz Clairborne (known for her fashion company Liz Clairborne Inc), Pusha subtly compares his fly status to the high status Claireborn achieved in her company.

“White wedding, Vogue had the exclusive

Any blemish on my past was prostitution

Sit back and let them draw their own conclusions

A picture’s worth a thousand words, Mr. Houston”

Here, Pusha’s mission statement is thrown to the forefront: let the outsiders talk and gawk at your success, and let the pictures you paint with words speak for your quality.

“You wonder why cocaine’s up in every song?

Many of Pusha T’s detractors cite his coke rap as a flaw in his lyrics, being too samey. Pusha hears the criticism, and rather than fight against it, he absorbs it and lashes back in the straightfoward, unfiltered way he does: cocaine dealing helped him survive, so it lives in his rhymes.

Go home and go get’s it

Your Miami rental cars are sleeping in my garage motherfu****s”

The final bars of this song can best be described as the “Pusha T Fatality”. Push is always itching for the last word, a final diss to put the nail in the coffin, and here is no exception. This diss is aimed at Wayne once more, and is a nasty flex on wealth and priorities. By mentioning his cars are rented, Push brings to light that not only are these cars bought, but being unused in his garage. It appears as if the material wealth is useless to Pusha as he seeks to separate himself from the pack of feeble trappers and flexers dominating the rap game today…

Including Wayne and Drake.

Thank you so much for reading! Let me know what verses you want me to cover next!

Soflosound.com is your one stop shop for hip hop fans’ music reviews, profiles, and essays. By the youth, for the youth, and allied with all oldheads everywhere. Leave a comment below to leave your thoughts and chime in on what you want to see next!

“East” by Earl Sweatshirt – Addiction to an Enigma