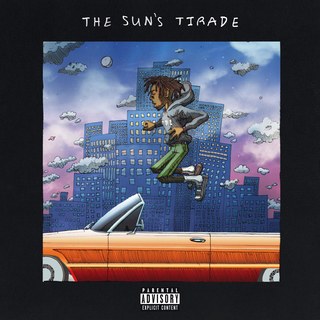 Isaiah Rashad is an interesting one. A reclusive Chattanooga rapper brushing shoulders with some of the West’s biggest names (Kendrick Lamar and Schoolboy Q), Rashad has earned a spot amongst many hip hop fans’ favorite underground artists. One of the reasons for this appreciation stems from his 2016 album, The Sun’s Tirade. Upon its release, it received nearly universal acclaim, unprecedented buzz for the stealthy southerner, and appreciation from many corners of the internet for its unique blend of old school R&B, southern rap, and unique personality…

And just as quick as a snap from Thanos, Rashad disappears. The internet remembers him, however; as do I. And now, as I patiently wait for news on his whereabouts, I play The Sun’s Tirade during my summer before going to college. I’m a firm believer that The Sun’s Tirade is one of the most important releases in the past few years, and a perfect album to play in the summer. It’s an introspective, topsy-turvy journey into the struggle of doing what’s right while the demons of addiction and pleasure haunt your every step. As my generation is tempted by the allure of endless hedonism while heading into their future, it remains one of the most important albums I’ve ever heard.

“Oh I believe I feel great today, I can’t help but just pour my drink”

Summertime is fascinating for anyone, regardless of their generation. It’s a time of infinite opportunity, for both fun and success. Summers can be dominated by endless partying, celebrating the joy of no school or lightened workloads with some booze and baddies. It can also be a time for people to make moves in silence by locking in and pursuing their careers and passions, taking on the new responsibilities they must take as they mature into a mature member of society. The Sun’s Tirade focuses almost entirely on the duality you find in the season, using Rashad’s production and lyrical content to dissect how the worlds of hedonism and duty clash in an ugly (although necessary) way.

The season is ingrained into the beats Zay flows on. The production here is old fashioned, focusing on building a hazy atmosphere that resembles a hot summer night or afternoon, heat waves reflecting off a car with low gas. Even on more electrifying moments, instrumentals remain caught in the stupor of relaxation and bliss, with coy whistling and horns accentuating Zay’s carefree and sure playboy status on “Tity and Dolla”.

Summers can be dominated by rain, by late night existential crises; the quiet textures and drums on several cuts resemble the evenings spent with a loved one or a lonely bed and raindrops. Even with the quiet volume these instrumentals have, there’s a sense of tension. It’s almost as if Zay is ready to explode amidst his vices, either to proclaim his triumph like on the multi-faceted “Park” or the downtrodden pleading of “AA”.

Just as the dog days of summer offer so much potential, they can remain still, untouched by decision. On the same day you can grind at the gym, you can take a nap on the couch. Even when Zay moves forward with a cutting flow, or topical verse, they remain hypnotic and relaxed, a reminder of that lethargic feeling many know all too well as they sit bored or intoxicated in a hot summer day…

“Mama I knew I was ‘bout it, way before venue was crowded”

On “Park”, Rashad’s genuine love and appreciation for his craft shines through in a spectacular explosion of success and cryptic imagery.

Aesthetics only go so far in crafting a story; The Sun’s Tirade is truly successful at portraying the unending battle between duty and quick happiness. The critics of Isaiah Rashad tend to peg their complaints on Rashad’s stream-of-thought delivery and unclear lyrical subjects. Listening to the album from front to back, however, gives Zay credibility as a storyteller and an actor on a lone stage, performing the realistic tug of war that addiction and career has on someone. The album starts off seemingly focused, straightforward in Zay’s reflection on success in the rap game on “Free Lunch” and the ethereal “Wat’s Wrong”, or his ever-present drug addiction on “Stuck in the Mud”. The album begins with a call to action, the first track being a voicemail from Zay’s label owner Anthony “Top Dawg” Tiffith” forcing him to meet deadlines.

The deadline is met, but there seems to be a distraction from the booth bothering Rashad. His son and fears of failure grow up before his very eyes as he attempts to rap for the “squad” on “4r Da Squaw”, he pines over love on “Silkk da Shocka”, he succumbs to alcohol and reflects on race in “Bday”. The odd spelling of several tracks give off the feeling of being distracted, almost as if Zay struggles to pull himself together to do what is right for his family, fans, and finances. Voicemails float in and out of the tracks, begging Rashad to find a damn topic, confirming his distraction from duty. Sure, he loves the game: “Park” confirms his passion for the art, “Tity and Dolla” revels in the success Zay has gained in his career, but the shadow of pleasure from parties and drugs pervades throughout. On “Rope//rosegold”, the abstract nature of Rashad’s lyrics seemingly point to someone or something, possibly rap, saving his life from drugs…but it can easily point to the opposite direction. Someone still struggling to find themself can find their immediate happiness in substances, only to find that they just may need that rope to climb out of the darkness they sit in.

“Stuck in the Mud” is a sobering revelation for the listener and Rashad; amidst love and happiness, the feeling of being stuck is an incredibly accurate way to relate the struggle between success and easy celebration so many feel in life (especially in the summer). If a stage play comparison is used for The Sun’s Tirade, this is the mid point, and directs Rashad to an entirely new environment. He is no longer faced with the rap game, but drugs and women. “A lot” is a hypnotic, almost typical traphouse banger, but a sense of unease and terror lingers on Zay’s breath, carried over into the pleading singing of “AA”. Now, as Zay lapses into his bad habits, a hunger for purpose is palpable.

As we spend our time in summer doing nothing, putting off our futures and jobs until the next day, that sense of guilt we feel is incredibly similar to that which Zay portrays on The Sun’s Tirade. We feel compelled to complete our destiny, even if it may be a pain in the butt to do, but we also enjoy the glee found in the bottom of the bottle. Even when we celebrate that we’re dressed like rappers or getting the girls we want like on “Brenda”, we still feel need to find that “topic”. If it’s a coherent song, Zay wants it but cannot find the maturity to accept that role. He remains listlessly trapped in his addiction, mumbling and laughing through many tracks on the back end of the album.

The Sun’s Tirade seemingly ends less on a triumph, and more on a simple shoulder shrug. We view Rashad finally finding that “topic” he so desperately needed on “homies begged”, but everything seems so unresolved, so unclear. He still misses his son, time is moving without Isaiah’s consent, and the call of the party still lingers. It’s powerful in its uncertainty.

Hell, isn’t that just like life? Even when we find the motivation to get to work in the summer, the temptation of the short term hangs out in our closet, ready for any weak moment to snatch us away. We feel incomplete, sleuthing for some perfect answer to happiness that always remains incomplete.

Isaiah Rashad’s career, in the same way, is incomplete. He still lacks that big-name breakthrough, that one single to bump in the cars from Tennessee to California. He deserves all of that and more, especially with the talent and masterful discography he possesses. The career of someone as conflicted and as young as Zay is rightfully unclear. As are our summers. Can we push through and find our real meaning, our real happiness?

Hell, I don’t know. Neither does Isaiah Rashad. But with albums like The Sun’s Tirade, the struggle is made all too real, made all too clear for any young person in the dog days of summer, waiting for the next chance to hear Isaiah Rashad rap again…

I hope all is well, Mr. Rashad. I wish you good luck, and hope you know that you will have an army of supporters when the time arises.

1 thought on “Duty vs. Pleasure in the Summer- How Isaiah Rashad Displays the Temptations of Growing Up”