Sam Smith: The Thrill of It All- Album Review
(By: Thomas Rodriguez)

Sam Smith turns the emotion up to the max on his latest effort.

My first exposure to Sam Smith, like much of the people who know of his music, was through the extremely successful song “Latch” by the electronic duo of Disclosure, where he dominated the song with his vocals. However, I think we can all agree that Smith has exceeded the title of that one guy on “Latch”, and really made a name for himself. This is mostly due to his great vocals and his hit songs “I’m Not the Only One” and “Stay With Me”, the latter of which he won two Grammies for. These two songs are definitely not something you listen to for smiles; this is essentially depressing pop, and it’s impressive that he’s been able to make a big name for himself with songs that make you bawl your eyes out while listening to the radio on your way to work.

With this album, titled The Thrill of It All, Smith continues that trend. The title itself is a bit misleading, because you will not, WILL NOT, get a real thrill out of this. This is really less of a trip to Disney World and more of a journey into the Sam Smith Depression Theme Park. Which isn’t necessarily a bad thing; it’s actually pretty good. Tied together with simple yet effective production, and emotional lyrics, this album is relatively solid gift made for you to cry at night.

Opener “Too Good at Goodbyes”, a somber and relatively quiet introduction for the album, lays the mood and mission of the album right at the listener’s feet. The instrumental, just some quiet piano and finger snaps, merely plays as a backdrop to what Smith is doing vocally, which is really quite great. He has a lot of range, and his voice carries such a deep sadness that you can’t help but relate to his fears of being too close to someone to face heartbreak. Although it isn’t really the best track on the album, it does introduce the whole idea of what the project is going for well. The next song on the album, “Say It First”, on the other hand, does the exact opposite of what the first song does. Simply put, instead of being good this song is bad. The production here is just as simple and quiet as the previous song, but the execution here is much more weak, what with the out of place synthetic drumbeat and electronic sampled hook. It seems good on the first listen, but a second listen will give you a bad case of sonic deja vu.

This deja vu is really the album’s biggest weakness. Songs like “Midnight Train” and “Palace” have no real identity or concept to them. They’re sad without having a reason to, and try to fit in with the “sad party” that is the rest of the track listing, but ultimately fail on the basis that what they’re doing was done better before. Smith’s singing and production on these songs aren’t necessarily awful (those titles still go to “Say It First”), but as yours truly was writing this review, he almost completely forgot what these songs sounded like, despite listening to it three times before jotting down my basic thoughts on the project.

However, the album does have a majority of good songs to make up for the painfully boring and redundant ones. Excluding “One Last Song” and “Baby You Make Me Crazy”, these songs are mostly similar to the opener in style and execution: quiet but pretty instrumentals, depressing lyrics, and good performances all around. The song “No Peace”, featuring vocals from YEBBA, is a really pretty duet, executed beautifully with some awesome vocals from both artists and some solid percussion and keys. The lyrics themselves, about not finding peace after being away from someone you leave, are well written, if a bit simple, and really tug at your heartstrings. The same can be said for the track “Burning”. Starting off relatively quietly, the song progresses into an
outstanding and almost ear shattering chorus at the end, singing about the pain of lost love. The emotion here really did hit me hard, and got me reengaged in attention for the album’s second half (this song came right after the tiring “Midnight Train”).

Heartbreak in general is not Smith’s only theme throughout this album. Having come out as homosexual, Smith does deal with scrutiny from the public eye and religion. And his lyrics on this album contain many references to his faith and loyalty to God, despite his preferences in who he loves. This is shown in the standout track”HIM”, where Smith sings over some beautiful choral vocals as he talks to God in a heartbreaking and thought provoking song about who he loves, and whether God will love him despite his flaws. His performance here is outstanding, the emotion powerful, there’s really not much else to say. This theme is continued on album closer “Pray”, and bookends the album really effectively. Smith, unlike most modern pop artists, can make a cohesive album? Hallelujah!

Before this review is closed out, one other song worth mentioning is “One Last Song”. This song is jazzy. And this reviewer digs it. It was a moment of levity in a trek through the sad valley, and even if this song wasn’t necessarily rainbows and unicorns, it was still a bright sun in a bleak, cloudy day. The brand jazzy production here screams of older days, what with those amazing swing era-esque horns, and just puts a smile on your face as you briefly forget that you were crying from the first song. The other “happy jazz” song, “Baby You Make Me Crazy”, while falling under this album’s problem of being repetitive and not as good as the first idea that it follows, was more enjoyable than the worst of this album’s songs, and was at least good. Seeing a full project of jazzy production like this from Smith would be interesting…

Overall, this was a solid project, but it was hampered by a few issues revolving repetition. Despite it, any listener can confidently say this was a strong outing, mostly due to the emotion and performances displayed by Smith, with some pretty good production. Just get some Kleenex for your eyes.

Tracks to Save: HIM, One Last Song, Too Good At Goodbyes, No Peace

Did you like this album? Any comments or criticism? Comment down below and let me know! I’d love to hear what others think! 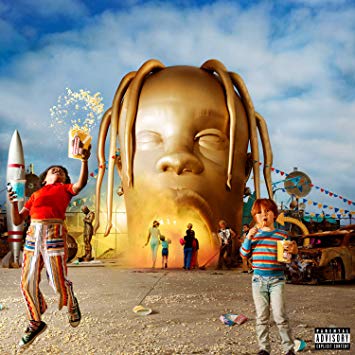 THE Album of 2018- Astroworld Review

5 thoughts on “The Thrill of It All- Album Review”